It’s official!  1610 N Honore and ‘the greenest garage in Chicago’ will be part of Greenbuild when it comes back to Chicago.  Greenbuild is the annual meeting of the USGBC and brings 25,000-30,000 building professionals and others interested in sustainability together for a 3-day conference, exhibit hall, and tours.  The international conference is one of the largest in the greenbuilding industry and past keynote speakers have included Bill Clinton, Van Jones and Al Gore.

From the acceptance correspondence:

Congratulations!  Your tour proposal has been accepted for inclusion in the Greenbuild 2010 Tour Program as part of the following tour package:

is back! (as Elton John used to say something along those lines).

The bridge from the kitchen to the rooftop deck on the garage was sent off for galvanization and then re-installed. 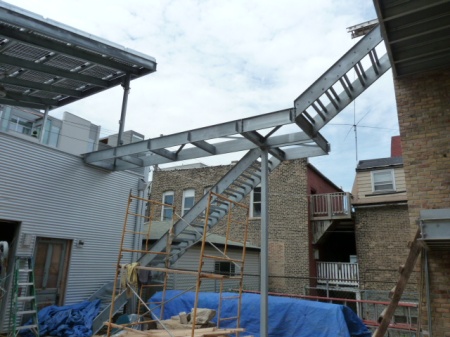 view from the courtyard

View from the kitchen

From Floor To Ceiling

The 1890’s home contained some nice, wide old-growth pine wood floors.  Over the years they had been painted and covered in newspaper, multiple layers of tile, and carpet.  Also, because they were soft wood they developed extensive wear patterns and shallow spots in high traffic areas.  As a result, they weren’t great candidates for re-use again as flooring. 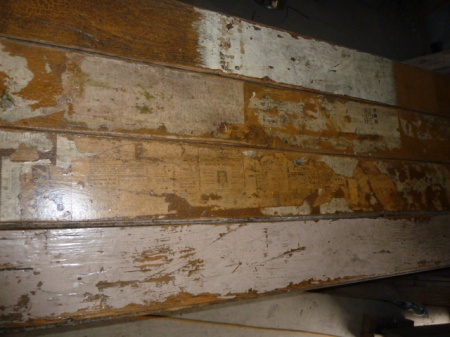 Rather than give up on the product and send it off to a landfill, we decided to flip it over, plane it, seal both sides and re-purpose it as soffit facing.

Below Arthur, Vladamir and Chris put the final touches on the glasroc ceiling. 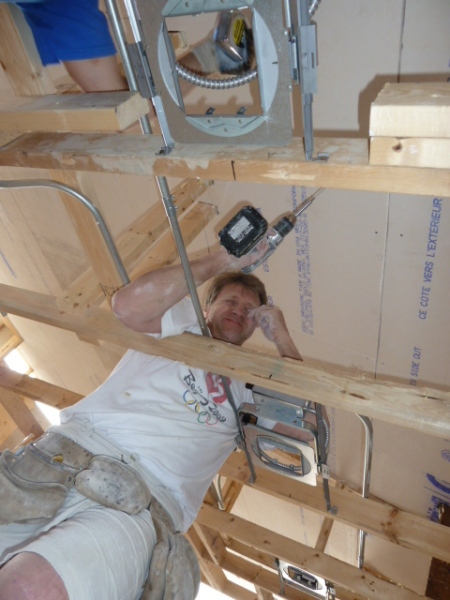 There was a time when choosing drywall amounted to determining if you wanted 3/8, 1/2, or 5/8 thickness, white board or green board and that was it.   Recently though, problems have developed related to certain drywall brands that contained sulfur and mercury and other toxic elements that corroded copper pipes and other metals in the home.  The attached story highlights ‘toxic drywall” installed in Richmond Virginia which was imported from China.  Other stories have been published about the rebuild in New Orleans after Hurricane Katrina where residents found similar results.

The EPA did a study looking at both foreign as well as American made drywall, and though the drywall with the most toxins was a foreign brand, several american products were found to contain contaminants as well.  The Pharos project– part of the Healthy Building Network, also has created a rating system for drywall in which they review and assess manufacture reported content.  There is still a lot of gaps to be filled in on what products do and don’t contain and how they are getting in there, but in the end after reviewing safety data sheets from companies and using the EPA study we decided to go with glassrock from Certainteed for the ceilings (due to the lack of paper they are mold-resistant) and gold bond from National Gypsum for the walls.

Now that we have that settled, and the ceiling is up, we’ll next install the radiant ceiling system which will heat and cool the house- Efficiently, and be the subject of a future post.

We placed the upper floor concrete a few weeks ago which will serve as the finished floor for the Kitchen, Dining Room, and Living Room.  The floor was lined with tubing for radiant heating AND cooling through-out the floor.   The concrete contained integral color.  It was supposed to be ‘charcoal’, but turned out to be more of an ‘eggplant’.  At first this was a concern, but the color has grown on us, and as luck would have it is going to be an even better color for the space.  Whew!