Raise your hand if you’ve set off the new alarm system. . . .

The new alarm system is working as evidenced by two calls in the last 36 hours.  The first was Tuesday morning at 3 am, which resulted in Chicago’s finest responding within 5 minutes, where a real attempted break-in was discovered.  Together, we did a walk through of the house (after I had slinked up to the house afraid I was going to surprise the potential burglars in the act), and discovered the break-in point.  They held a light on the door while secured it with two more 2 x 4s.

This morning, Woytek decided to enter the garage without turning off the alarm- presumably to test the system, which it seems was mildly amusing to John. 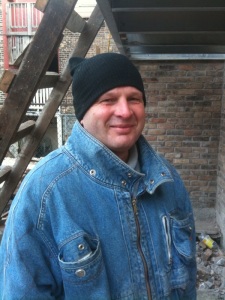 John the Plumber (not to be confused with Joe)

What is fortunate is that Dexter did not have to get involved, and its good to know the new system is working as it is supposed to.

This entry was posted on Wednesday, March 3rd, 2010 at 7:49 am and is filed under 1. You can follow any responses to this entry through the RSS 2.0 feed. You can leave a response, or trackback from your own site.